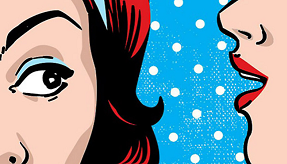 Dear Confused and Serious:
The problem with secrets is that they are so difficult to keep by the holder of them. Unless a heavy duty tape is across someone’s mouth, you can bet that all will be eventually revealed-even to a stranger. It takes emotional and psychological energy to hold things in, and the so-called new friend obviously needed a release. That’s the problem with secrets. They bring up strong feelings of grief, shame, and anger that need to be let go, so it lessens the burden on the carrier, and dumps it onto to someone else.

Why do you think she confided in you? A Harvard Study  by the Harvard sociologist Mario Luis Small, indicated that we confide in strangers more than we realize. Think how many times you were trapped on a plane or train for hours, and a perfect stranger told you their life story including the juicy parts. I did it myself recently. I call it my secret dump! Why did I do it? Hear me out because it speaks to your situation. I felt that this was my breakthrough year. I have never really cared much for whether people liked me or not, and I am so ready to move forward that I had a very unfiltered conversation with a woman I recently met, and liked. I didn’t ask her not to tell anyone, but I did verbally dump on her-things that would take a few getting to know you drinks before I said anything. I was moving on from a proverbial “garbage” year and I wanted everyone to know it. Why did I choose her? Because I liked her, and because I could tell she was carrying around a load of baggage she needed to get off her shoulders. It was a little manipulative on my part, but it was for both our goods. I wanted her to feel safe with me, and could see us becoming friends.
It was an  I’ll tell you my secret and you tell me yours moment. Those kind hopefully bring people closer.

Then there is another kind. When I was travelling to Mexico I met a very nice man at the airport lounge. I was grumbling about how tired I was waiting for another plane, and we got into the usual traveler’s chit chat. Where are you going; what brings you here; how long are you staying. They are usually fun, trite, sharing of travelling stories without even an exchange of names. This one was a little different. He told me his name was Will, and confided in me that he was taking a six month solo trip because he just broke up with his wife after his young son had committed suicide. His beautiful son had struggled for 6 long years with gender issues and couldn’t find the light. An operation to change him into a girl wouldn’t happen until he turned 25, and the thought of waiting another 5 unbearable years wearing skirts, and feeling like an outcast was too much for him to bear. Will, his head and neck bent downwards towards the floor, revealed that he had screamed at his son, “Why can’t you just be normal!” after an exhausting six weeks of daily pulling his son’s depressed soul out of bed. He couldn’t forgive himself.
Why did he tell me this?
He couldn’t help himself. His sadness was so vast and deep, it was his only way to look for light. He was looking for redemption from a stranger if not God, who he wasn’t hearing from. When he parted on a plane going in the opposite direction from me, we hugged for a very long time. It was very intimate, and for a very brief time I knew this man.
Some secrets, like this one, require you just to listen and hold grief out of kindness.

Which brings me to your dilemma.
Sometimes we tell our secrets to strangers, because they are easy targets. It was the right place at the right time, kind of dump. It also depends on the topic. Even close friends have limits. Sometimes they don’t want to hear intimate details, nor can they be trusted with them. Let’s face it- if I knew a friend’s husband was addicted to porn I couldn’t look him in the face without seeing him masturbate in the kitchen sink. I would think differently of him and of her. Fair or not, I would judge the two of them. That is why the “new friend” chose you. Chances are you wouldn’t see her again, and she wouldn’t have to worry about your judgement.
But here’s the thing.
If someone tells you a secret that puts you in a moral dilemma, then they need to be told. It’s not the fact that you were a stranger and she shared a personal dilemma or feelings- it was the fact that she absolved her personal responsibility of leaving two children at home with her husband who might be harmful to those two girls.
I think she wanted you to do the work for her.
It was a weak cry for help to make her responsibility, your responsibility. It was a cry for you to take the action she was too weak to take herself. If she was speaking to a professional psychologist, they would have challenged her on her choice to leave her husband home with two little girls. And she would have missed a weekend away. Even if he wasn’t a pedophile, but just someone with an over zealous sex drive, magazines or the tv could have been easily accessible to the wrong page or channel for kids to see.

It’s human nature to look for comfort and solace and we will take it in any form we can get it. Often it is the wrong time, person, and circumstance. Her secret became your secret. It is an absolvent gesture.
My advice to you?
Tell your friend THE secret which is now YOUR secret. Your “REAL” friend. Let her decide what she wants to do with that information. In this case, you have no obligation to hold onto a secret that a stranger passed on to you. There is no morality involved here around a social contract that says it is necessary to keep a secret because the woman broke the code. It wasn’t a secret about her shame and feelings, rather than a shirking of her responsibility.

You are free.
Spiritual Exercise: Once you have unburdened the “secret”, adopt a perspective of indifference. Adopt a wasn’t that interesting point of view, and let go of any residue of anger.