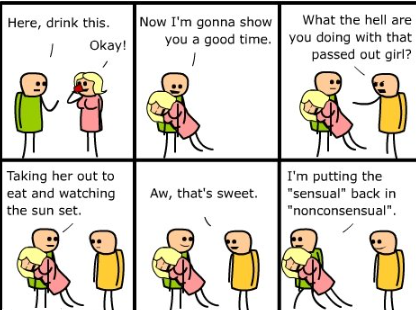 Sexual Opportunists Can Be Any Age.

Dear Woo Woo Girl: I never thought it would happen at my age but here goes. I met a man on a hike. He was a nice person and we had much in common. We spent three hours walking and I became very comfortable with him. He showed me pictures of his condo. I could tell he was very proud of it so when he invited me back to see it I went. At his condo he offered me a drink and we were having a great conversation. I was light headed from the long walk and heat and said so. I asked for a glass of water which he brought but before I could finish it he pushed me down on the couch and started to grope me roughly. Luckily I am a triathlon athlete and could push him off. Here’s the kicker. He’s 70! I was shocked! I am also fuming.
Signed “What Just Happened?”

Dear “WJH” : I am so sorry this happened! Of course you were shocked and fuming. You got way more than you bargained for. Attempted sexual overtures feel like the rug has been pulled from beneath your feet. I would be fuming too! At seventy, he should have known better. There is protocol to dating that consists of a few more getting to know you dates over the immediate bump and grind. Come on! Especially as one gets older.

But here’s the thing. The need to exploit a sexual opportunity can happen at any age.

Your experience is a perfect example of the conundrum of knowing who is a sexual predator even when they don’t look the part. It is almost funny that a 70 year old had the gumption to try and he challenges the stereotype that sex and the desire for sex in an older gentleman doesn’t diminish or entail Viagra. But that is the problem isn’t it.

The stereotype of who we see as potential abusers doesn’t include 70 year olds.

Going to the condo of an elderly mans versus a younger man’s, feels different. I think if your friend had been in their thirties, you would have been a little more cautious thinking an older gentleman might pose a lesser threat and be more interested in your mind, and companionship over your body? Clearly that wasn’t the case.

Who is a predator anyway?

A false sense of security lies behind who we think might be on the prowl. Going to an older stranger’s home is different that a virile, young man, so we think. Asking for something more than a glass of water is dangerous as is simply being there. It shouldn’t be, it’s not fair, but it is – particularly if there is alcohol involved.
Sexual overtures bely so many things. Mostly, it opportunity. Taking it where it can be found.

When I was in my twenties I had dinner out with a friend. We shared two bottles of wine and I hopped on the subway at 1am tipsy but coherent. The subway car was empty and a lone man came over to me and started to hump and grope me- pushing his boding into mine, his hand finding his way under my bra. I didn’t have the wherewithal to shout for help and quickly got off the subway. He followed me up the stairs. I went to the ticket booth and asked for help, and the kind man said he would give me a ride as his shift was ending, and we couldn’t find the other fellow. This kind man was going out of his way for me, taking me right to my apartment building. But that was after he pulled over and hopped on top of me! I was lucky enough to open the car door and roll out. I had found myself in two very dangerous situations in one night. I never reported the transit worker because I was ashamed that I had asked for it by getting into his car, even though I thought I was being helped. I was his opportunity.

We like to think it is just men who take advantage of women who look for opportunities. Certainly they are the most predators. History and rape numbers indicate men are more likely than women to rape. Hands down, every single girlfriend of mine has been taken advantage of at least once in their life on a date or just out on the town. But women do it too. Here is another stereotype. Men don’t say no. Or do they? I’m not knowledgeable enough to comment. I know a few who have, but I also know it’s not seen as date rape by men among men, and society towards men. We assume that men think of it as their lucky night-maybe they do; maybe they don’t.

The bigger picture and the one that really counts is no matter what situation we put ourselves in; no matter what age we are; no matter how much we have had to drink, sex is based on sober consent-the question in some form is asked-can we have sex, can we make love, can I see you naked, would you like to go further, can I lick you all over? The answer must be a clear yes.

Anything else is no which means stop. Now.

We know this. Everyone understands this.

It’s all so very complicated. I doubt if taking advantage of a sexual opportunity will ever stop. Culture, duty, bias, power, shame. Opportunity! They can embed an implicit yes.

Sex – hot and spicy interactions are messy. Needing to please, too drunk to say yay or nay, a no means yes and a yes means maybe, and a fxxck off simply means harder, and harder, is well hot.

But it is not yes. Come on people we are not animals. We have evolved, haven’t we? It is either yes or no. At any age.