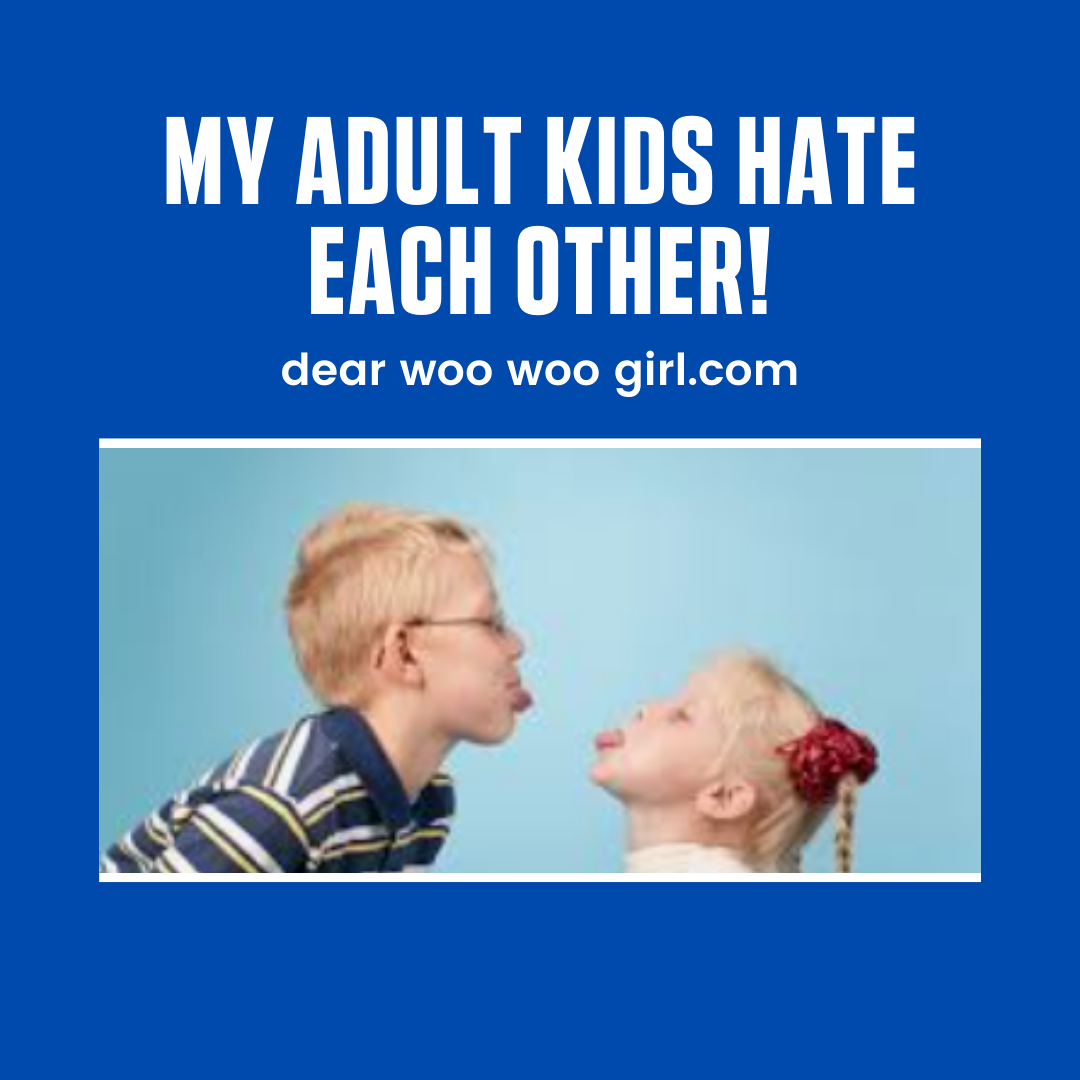 My Adult Children Don’t Speak To Each Other…

Dear Woo Woo Girl:
My adult male children don’t speak to each other. At family gatherings they ignore each other or might say a curt  “hey” or “thanks” after one of them have passed the butter. That’s about it. Their feud started years ago and they have always been jealous of each other. They never did get along but they would at least talk to each other or smirk at something. There is nothing between them now. When I suggest one take the other out for a beer I am met with a stone face. I can’t tell you how much my heart hurts over this. I keep thinking I treated one child differently, or showed a preference to one over the other, but honestly I don’t know. What do you think? Was I a terrible mother? Signed: Terrible Mother

Dear TM: I have many thoughts on this, but only as one mother talking to another. I am just a lowly writer who gives advice, thoughts and perhaps a different perspective that will lessen your load or give you a virtual shake. With that out of the way, here we go!
Why do moms think that everything is their fault? It is their “go to” dark closet moment; when they are disappointed in their children or they don’t have the fairy tale ending of a happily ever after family story. Sometimes it has nothing to do with you. Did you wonder whether your husband treated them differently or did you keep the burden preciously yours? Maybe he was inadvertently part of your family dynamic that created a rift. Don’t carry the dumpster piled high with guilt alone. Talk to your husband and see what his thoughts are. Maybe he can shed some light, distance, and his perspectives on the family dynamics that were uniquely your families. Two heads are always better than one.

Then, there is the “get real” check we must all do. Be brave. Be totally honest with yourself. Sometimes inadvertently we favor one child over the other. My oldest son was a difficult child to raise, and many times I looked at him as a burdensome child. The bundle of joy I carried for 9 months wasn’t so joyful –more work than wonder. He sensed it. I know he did. We talked about it later on in his life, but his feeling of resentment was strong and something he has held onto. His younger sibling was easier, and less tiring so circumstances and human frailty picks the path of least resistance. I didn’t start out looking to treat one differently, but I did because it was easier. Over time, that can change. Year to year with children makes a difference, and the more difficult child becomes easier and vice versus. One only hopes that by the beginning of adulthood the score card has balanced itself out. It’s not intentional.  Although, the child with the same interests or complimentary temperament will just mesh better. Maybe one son understood you better which will bring him closer to you- there is nothing worse than feeling misunderstood as a parent. Children are sensitive little ducky’s and sense who is the favorite even though it may be an organic bonding of family members. It happens in every tribe.

Sometimes, siblings are too similar and don’t recognize their behavior, or thoughts in their other half. They find their sibling irritating because they reflect back to them what they look like. It isn’t always pretty. I always groan or chuckle when I see this because my sons ALWAYS cried foul. One son may leave dirty dishes hanging around and I will admonish him. Then my youngest son who has just murmured something about how dirty his brother lives, leaves a pile of crumbs, unopened bread and mustard without the lid left on, a dirty knife, and a half drunk mineral water on the counter. When I admonish him, I’m accused of not coming down strong enough on the other son. I will never win because both boys lack the capability to see themselves; their similarities in each other.

Maybe, there is a single reason for that bottled up anger. Males are competitive, and “sons” don’t always allow themselves that shrieking match that gets to the heart of a matter filled with tears like fights between daughters. Boys don’t let on how deep the knife went in. If kids can’t let go of a hurt, and carry  it with them for years then they will be hard pressed to learn how to forgive someone who has done them wrong, including a sibling. If that is the case, then momma you will know it, because let’s face it, momma bear intuitively knows plenty.

Relationships are complicated, messy, dysfunctional, yet we should not stop striving for the fairy book ending. Why?
It would be overwhelmingly sad to leave this world knowing that the two people you are leaving behind can’t acknowledge your history together, or their past. Like two passing ships who shared a harbor once and barely honks their horn or flashe their light at each other. It would hurt to see.
Adult sibling rivalry is toxic but it CAN be a life lesson and opportunity.
Reach out to teach your children whatever their age, forgiveness in a family must run deep, because it will impact how they view their past and how they shape their future story. You and your husband together can individually speak with your sons to talk about what went wrong, and tell them how it pains you to see them like this. Facilitate a meeting in a neutral place where no one can throw a water glass at someone’s head and encourage them to talk it out. Mom, be the moderator. If you were part of their problem or your husband, own it. Try and rewrite your family history together. Be forewarned though. As a “fixer” I know this to next statement to be true.
Not every relationship can be fixed.
Sometimes they are not meant to be and it is a choice the sets the trajectory of their life moving forward. It can be a bitter pill to swallow.

Spiritual Practice: Familiarize yourself with how forgiveness heals, with Deepak Chopra
Give this some thought: What does adult sibling rivalry entail?
xoxodearwoowoogirl