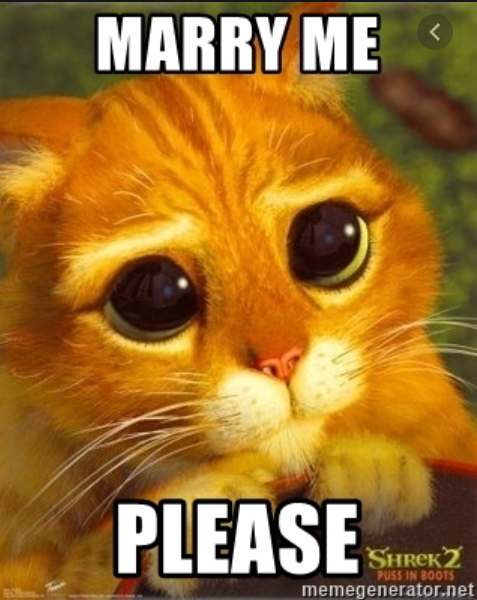 Dear Woo Woo Girl: Here’s a question for you. How do I get my partner of six years to marry me? We have been in a monogamous relationship the entire time, and have two children together. I am 28, so we were young when we got together.  I get why he was reluctant to get married earlier,  but here we are six years later and no mention of tying the knot.  I have subtlety dropped hints that I would like to get married. It falls like a thud, on deaf ears. Not sure what to do?

Dear Not Sure: Commitment is a funny thing. It has soo many different messages and meanings and it is hard to decipher what is and isn’t real. Before you try and nail your partner down, nail yourself down. Ask yourself what does commitment mean to you? Faithfulness and monogamy is the traditional prerequisite of a committed partner, but so is being a stand up dad, a good provider, having someone you can rely on and someone who has your back and makes you laugh.
Has your spouse shown you in every other way besides officially tying the knot that he is committed to you?

Has he ticked off all your boxes except this one?

Is the need to officially state you are committed simply to ensure you won’t be robbed of your “big” day? You know – the one you have dreamed of since you were a little girl. I know the “big” day can be important in a women’s life and perhaps the one and only time you are the centre of attention and Princess for a day. It is precious and IF you are lucky, the one and only time you will walk down the aisle.

Let’s be real; the reality is, life works in strange ways. A lifelong partner is rare these days. I’m not saying don’t go for broke, rather be realistic. The traditional wedding day can be handled in a nontraditional way, and in today’s world more than once.
Clarify this in your head first, before you seriously broach the topic with your partner, because I am all for the balanced approach.  If your spouse has been a stand up guy all along except for this one issue, then throw a party for the two of you for your ten year anniversary; publicly declare your love for each other, wear a wedding gown if you dare (because you are common law married anyway)  and move on! Find the compromise.

BUT and it’s a HUGE  BUT: If you think your partner is holding back for other reasons-something you can’t quite articulate because you have no proof; just a niggly piggly feeling that he has some growing to do, ask yourself BEFORE you ask him:
1. Is he fearful your relationship won’t last?
2. Is he fearful he won’t be able to meet your needs, because you have been the dynamo in the relationship?
3. Does he feel suffocated in the relationship?
4. Is he’s afraid deep down, you will leave him?
Or,
he’s simply a thinking man, who doesn’t need the “state” to tell him who and when to love.

If your gut tells you it could be one or all of the above – then it’s time for a face to face. Get to the bottom of it, because his holding back is a passive move that hurts. Bring each point up, because chances are, he ain’t gonna fess up without a little prodding. Make time for a real conversation, that doesn’t include just dropping hints. If you can work through each protest, and a bit of laziness and procrastination on his part, chances are you will clear the air and know where you stand. Sometimes that is enough.

Be prepared for compromise. Find a timeline the two of you can live with, or a celebration that acknowledges the two of you as a couple. A Las Vegas wedding might be he thing. Something fun, and not too serious. The point is enjoy your union rather than cling to an old fashion idea of how to acknowledge it.

The end goal is to become closer with or without a wedding dress.

Love is love is love for it’s own sake without the bells and whistles. Sometimes that can be good enough.
Dear Woo Woo Girl: xoxo