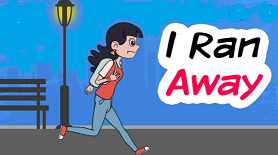 Five Reasons Why The Adult “Me” Ran Away From Home…

“You are acting like a child. You are irresponsible. You are selfish.”
“And…What is your point? LOL”
I took a LOT of flack for running away to Central America. Alone without the burden of my family trailing behind me, I left for three months undecided whether I would return or not. I bolted. Skedaddled out of Dodge.
Done in, overwhelmed, and emotionally fragile I needed an exit, that wasn’t a vacation but a journey and deep time out that would meaningful and healing for my wounded soul. For three months, then on and off again for another two years, I dropped any residual interest in my family and focused solely on me.
But wait. Who gave me permission? Who said I was allowed to do that…you know… just say goodbye without a guarantee that I was coming back?
I did!
Why? Because I was tired of waiting to be rescued and for things to get better. I was done in from learning the lessons you are never told. If someone had told me what I needed to know I would have coped better, but I didn’t, so I left.

I’m not blaming anyone, or pointing fingers but I came from a family that was less grounded, and more about having fun, even when my schizophrenic brother was throwing a chair through the front window. We laughed about it while listening to the crackling of glass break, and shards of glass fell to the floor.Politically correct we were not! Chaos, drama, and life shite was what we lived with.
Irish humor and a good drink was the cure for life wasn’t it?
There was a lot I didn’t know, because in my family making it through the day was the goal. An absence of a long term plan, or roadmap on you do this when that happens -just do what you need to get you through the day. No-one admitted that all the laughing and drinking to get through a rough patch, withers your soul and crumples in your hand like a dead leaf.

Which is why I didn’t know how to cope. During a really, really, really, rough patch in my life- my father died, my mother was living in her car thinking her house had been bombed, my son was an addict, my husband was depressed, and I had cancer-twice; and lost the sight of my right eye – I decided the Irish way of coping with life really wasn’t working for me. Looking back, I can now say, oooh, NOW I get why I couldn’t get myself back on track, NOW I understand what was missing. But back then; I was simply drowning.
My reasons may not be your reasons for needing to run away, but they are and were GOOD reasons. Just like yours.

1. I had zero boundaries. I can honestly say, I never had a conversation with anyone about the line someone doesn’t get to cross with me- now that can be anything thing. Sexual, emotional, or physical. In my case, during this particular time, I was carrying too much responsibility. There have been other moments when sexual and physical boundaries had been crossed, but during this ten year period, it was about too much personal responsibility caring for everyone except me. It amazes me how much as humans, we can take; how much garbage we can forage through without saying enough. I had no idea how to ask for help. Wine was my elixir.

2. I was in shock. I no this sounds crazy, really crazy, but I had no idea that so much could happen all at once to someone. I didn’t understand how I was supposed to feel. I laughed and drank, and organized my messy life – everything had a place except grief, anger and sadness. My heart had left the building, until it had enough of being ignored, and shoved it’s way back full force, and I turned into a sniveling wreck.

3. Honestly, if one person had said to me at the time, “I love You”, you will get through this, I would have been well, not fine, but not absolutely desperate either. People were kind to me. They brought food, sent flowers, took me to appointments. Let me rant. But what I really needed was a hug, and someone saying to me…
“You are going to be okay.”
“You got this. You really do…”
I needed a mother instead of being the mother.

4. This crazy period of my life left me feeling extremely fragile. I had never known what fagility felt like or even meant. In the past, I had been violated, I had been scared, I had been angry, I had been hurt, and even felt unloved, but never once felt fragile. I couldn’t bounce back to my resilient Irish self, and was a shell of the person I had been. If it was possible, my physical being would have disintegrated into the ground like compost, withering away.

5. In my teens, I got caught stealing. The police were called, and I frantically took off out of the store with my friend because I couldn’t dare face the music ie my parents disapproving faces or the wooden spoon. Myself and my girlfriend, ran away from home…to the laundromat. We wandered the streets for many hours in a blizzard, and found an open laundromat that was warm and dryers still spinning. Along with the hum of the washing machines, eating stolen chocolate bars, feeling protected from the cold, I found freedom. It was a taste of what it could be like to be completely on my own, with no accountability, and no shoulds. I was pretty sure I was teaching my parents a lesson and they would be worried sick about me. I enjoyed the feeling of control I thought I held over them and the fact that I could lie across the folding table, feet up against the wall without someone screaming “take those feet off the wall.” It was a gloriously glimmer of what it meant to call your own shots, no thought to the consequences and I held on to that memory for years. Somehow I knew I would come back to it.

Running away isn’t easy, and isn’t always glorious. Sometimes people get hurt-you hurt them and they hurt you. Guilt, giddiness, and relief come into play. But it can be a time for growth, healing, and experiences. When done well, it is meant for everyone.