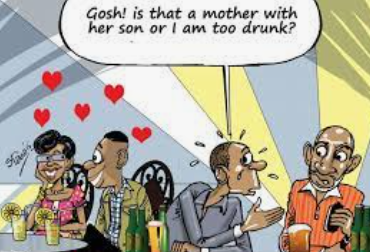 Older Women Are A Catch!

Dear Woo Woo Girl:
My son’s fiancé is older than him by 15 years. She is a nice woman but I think she is too old. What happens when she is 70 and he is 55. He won’t be attracted to her, and I am afraid he will end up taking care of her. What about the children?  She will be too old for children which means I won’t have grandchildren. He is a good looking man. Why can’t he stick with someone his own age. She doesn’t get the message that I don’t approve. They have been together for two years and I am sick of it. Their wedding is in three months. I am not a bad person, but I want him to call it off. Signed  “Mama Bear”

Dear “Mama Bear”:
Age doesn’t define a relationship unless  the balance in unequal. We often underestimate the younger person, thinking that they are being taken advantage of or are looking for a mother or father figure, who make all their choices for them.  Not true. The reality is the younger of the two know exactly what they are doing and what they need to get out of the relationship. They may be young but they are not stupid. Often it is the older person –man or woman- who needs to be careful as they are at risk of being hurt if their younger partner doesn’t view their relationship as permanent.

Here’s the thing. Older woman get to be maternal with a younger man.
The need to guide is extremely strong and your son can benefit immensely.
She offers your son much. He has a chance to learn many lessons without experiencing hard life lessons. She also is not as selfishly preoccupied with herself as many younger woman are.

“The way mature women carry themselves shows they know who they are. It equates to stability. They’ve already figured out who they are. Maybe not all the time, but a lot more often than younger women. They are all-around much more attractive to me.“

It is also a whole lot more fun. What’s wrong with that?
Here is what another fellow had to say about dating an older woman:
“I find that I’m attracted to a woman who has some degree of self-possession. I like the stimulation of a sharp intellect. I enjoy sitting down to dinner with someone who has a level of conversation I can appreciate and enjoy. I think younger women are sometimes too focused on starting families and that is rarely an issue with older women. I’ve always had relationships with older women. They know themselves.“

Relationships are symbiotic.
Whether they are toxic, beautiful, strange, difficult or exotic, we all get something out of it. Tit for that and all of that. Your son is getting what he wants from it. His needs are being met. He wouldn’t be getting married if they were not. Don’t underestimate their relationship. If handled well it can be a powerful relationship for many years to come.

As for children, it is up to them. Has he specifically said he wants them? There are many ways around having children if she is too old to bear them herself. Adoption and surrogacy come to mind. If they truly want children they will find a way to have them; it may not be in the traditional way you want them.

By being critical, and pessimistic you are missing an opportunity to find a friend in your future daughter-in-law. She is closer to your age and more mature. It would be advantageous to embrace her, rather than push her away. Your son obviously is open to learning; a trait that you could benefit from.
No-one knows what the future will be. In twenty years they might go their separate ways, wiser yet different. Don’t begrudge them this opportunity just because their relationship doesn’t fit your narrow definition.

Kick up your heals at their wedding and know he is benefitting in many ways. Don’t be that woman or mother who looks down their nose at older women. Woman are each others worst critic.

Spiritual Lesson: Let go of a judging spirit that builds arguments to support your point of view. Everyone walks their own path; even children.